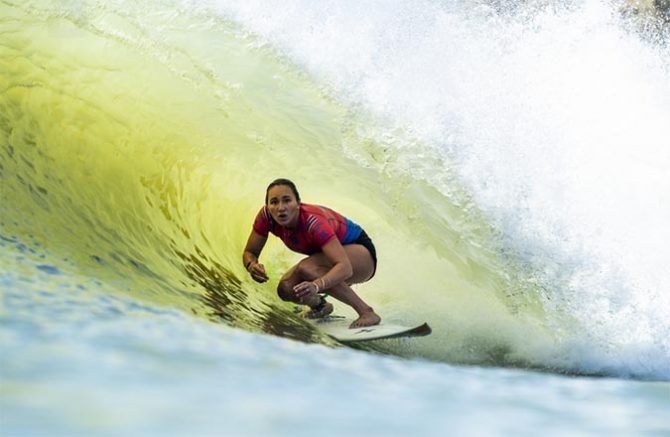 Carissa didn’t get caught up in the debate: “It exceeded my expectations,” she said.

There’s been so much debate about what the Surf Ranch and the world’s most visible artificial wave mean in the greater context of surfing, it’s exhausting. After three days here, I’m exhausted thinking and talking about it. You’re probably exhausted seeing and hearing about it (and maybe commenting anonymously online about it). Is it the future? Is it pure blasphemy? This much, I know: It’s simply a small piece of the sport. A very, very small piece (despite what the WSL hype-machine might have you believe this weekend).

Surfing, to the everyman, is still about the chase, tediously checking and studying conditions online, calling friends who live near a break, ingrained knowledge and experience on what those conditions mean to one’s local, getting skunked and of course (and most importantly) scoring the most perfect waves of your life once a year (at least).

Surfing at the Ranch, or at any of the new-fangled man-made wave parks, is not approachable to you and me. It’s a stroke of genius and purity of vision by Mr. Slater, there’s no doubt. But it’s simply not affordable—or worth it in the slightest—to pay $50,000 per session at the park. There is absolutely no debate that this fact alone makes the concept absolutely impossible to relate to.

But I get why the World Surf League is doing this. It’s a controllable environment. Contests can be run on schedule and they don’t have to move the world to make it happen (I don’t even have to tell you the astronomical costs of transporting heaven and earth to put on events at some of these far-flung locales). For cost alone and just paying the hundreds of people it takes to run a traditional contest through its waiting period, it checks off. Gabriel Medina and Carissa Moore are both worthy champions, and with their wins this weekend they validate something else in regards to the world title chase: that during the calendar year, the champion must be able to surf any and every condition given them better than any other surfer on the planet, from big, scary barrels to dribbly beach break to yes, man-made perfection.

Gabriel Medina closed the world title gap at the Surf Ranch Pro, calling the wave the “most high performance wave,” on tour this year.

Both Medina and Moore have proven to be as well-rounded as anyone in the game. “I was super stoked on it,” Moore told me after. “As a competitor, I thought it could get boring but every surfer seemed to find a way to open up on it and show off their own styles.” Athlete stoke varied on the event with Medina calling it the most high-performance wave on tour, while men’s runner-up Filipe Toledo told me he was “50-50” on whether the event should go towards end-of-year points.

Judging by negative online commentary from viewers and readers, though, maybe that style Moore referenced didn’t transfer to viewership. But surf fans are a fickle band of poo-pooers. They’re educated and picky and they know what they like. They love to tear down (and occasionally build back up) their favorite surfers, writers, movie-makers, brands, boards, and board makers and especially, it seems, the WSL. But surf fans need the WSL like they need a board to ride. And they probably hate that most of all, because competition goes against most everything surfing has ever meant to the soul of the sport. Surfing, of course, is as much a way of life, and a way people identify themselves, as any other outdoor pursuit in the world. Riding waves for most is a way to convene with a god we may or may not know exists. Call it spiritual if you will, or simply a way to see beyond the work-a-day world.

But to get better at surfing, to refine one’s craft, we need to watch other surfers who are much, much better than us. And admit it, we all enjoy doing that. We need to study more talented surfers and dissect them. And not every pro surfer—not even close—is tied in with a Taylor Steele or a Kai Neville, who can create endless video content and imagery of the best in the world for us to see on a regular basis. But the WSL can, and does. The League gives surf fans what they need, even when surf fans completely destroy the entity online. So honestly, surf fans (and I include myself in this group), maybe we all just need to shut the f*** up and get used to it? Because competitive surfing and wave pools are here to stay. At least for the foreseeable future.